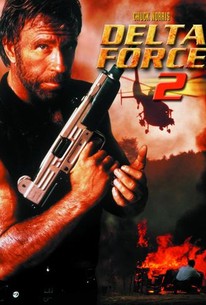 The Delta Force is back with Scott McCoy (Chuck Norris) now the head of the elite commando group. Ordered by the government to bring drug baron Ramon Cota (Billy Drago) to justice, the Delta Force accomplishes the mission. Cota escapes conviction on a technicality, and retaliates by killing the wife and son of the most explosive member (Paul Perri) of the Delta Force.

This world, geographically located anywhere between Miami and Bogota, is full of lots of rotting cheese.

While The Delta Force remained semi-serious until its bonkers third act, Delta Force 2 is over-the-top from the get-go.

Absolutely disgusting waste of time. You know when you're ripping off Rambo, something's definitely wrong.

Or known as The Colombian Connection but that's way too cheesy for me, but cheese is the name of the game here folks. Yep 'McCoy' is back and ready to take down some major drug kingpin scum. Funny thing is yet again despite the film title there isn't actually much Delta Force action. Again it all happens right at the end for the big finale, there's even less Delta Force action than in the first film! maybe they should of left out the Delta Force 2 bit in the title. Its pretty straight forward stuff, the ever evil Billy Drago is the worlds most dangerous richest drug kingpin ever and he's flooding the US of A with lots of Lemsip....errr cocaine. So the DEA draft in Chuck Norris of Delta Force to basically save the South American country of 'San Carlos' where Drago is based, save the USA from all the drugs coming in...just save the world in general gosh darn it!. Its all very predictable stuff that we've seen before (baring in mind its an old film of course), the step by step motions of any action flick really. The bad guys pull off some deals, kill some people, the good guys manage to capture the main boss, he gets away, he takes revenge on family members and this ignites Norris blah blah blah. It could easily be 'Lethal Weapon', well any of the first three really. Norris plays the same character he plays in all of his action films, the same damn bloke!. He doesn't swear, he doesn't speak that much, his one liners are a bit tame but we always manage to see him topless at some point. That said he does the job we expect him to and he does it reasonably well, but he's no Arnie, JCVD, Jaa or Gibson if you ask me. I think the problem is his films never really come across as adult action flicks, they lack that bloody punch to really get you excited, I guess his films feel like slightly adult episodes of the A-Team. In all honesty this film is so cheesy and cliched it feels like an old Bond film, especially with all the henchmen at the end wearing the exact same outfits. Not military garb which would be fine, but casual looking clothes, as if they all shopped in the same store or Drago ordered a huge supply of his favourite design. Speaking of Drago he's the boss here as usual, we all know Drago isn't exactly the best actor around but its his face. That snarly, slimy, creepy vamp-like face along with his skill of being a really really sadistic evil bastard that you just wanna see get taken down. Here he plays the white suited, white fedora wearing drug dealer to a tee, right down to the greasy pony tail. We know that Norris could break his neck in a heartbeat but Drago doesn't play like that, he's a shifty, dirty, underhanded slimeball who hides behind his henchmen and various weapons, love it. The films poster was always ice cool, Norris calmly cradling an Uzi, it looks smart, alas the film isn't as cool. Its very by the numbers, highly hokey and doesn't really look that special either. For the most part its rather bland with not too much happening, the finale is much better of course but nothing to write home about. As said at the start this is when we see some Delta Force unit action but its nothing amazing, lots of explosions. If it wasn't for the uber cool Drago this film would be a bit boring really...there I said it.

What a powerful, gritty performances, a lightning-fast pace and an outrageously exciting skydiving sequences in this Chuck Norris's sequel explosive action-adventure film. With a chilling performance from Billy Drago is a great choice to play the main villain and John P. Ryan really seems to be enjoying himself here, and gave a fun performance. The direction is good. Aaron Norris does a good job with good camera work, great angles and some spectacular shots during the sky diving stunts!. There is a bit of blood and violence.