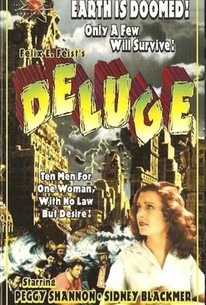 A solar eclipse, a massive tidal wave, and the last few people on Earth provide the focus of this early disaster film, set in a soggy New York City. Only one man in the Big Apple survived the wave. He swims out of the city and later meets the Eve to his Adam. He believes that his wife and child are dead, so he begins courting the woman and defending her against marauding stragglers. Things go well until his real wife shows up.

Harry Semels
as Renegade
View All

You can only dizzyingly conclude that measuring performances is pointless in this wondrous world of artifice, and this revelation comes just in time.

Deluge is pre-code and made outside the studio system (distributed by RKO), which gives the creators a little more freedom to imagine life after the fall in terms a studio would resist.

There are no featured reviews for Deluge at this time.