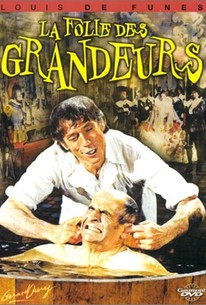 This French historical comedy/farce, loosely based on Victor Hugo's play Ruy Blas, benefits greatly from having Louis De Funes and Yves Montand in the roles of Saluste and Blaze. Saluste is a nobleman who has been exiled from court and sent to collect taxes in the countryside. Blaze is his assistant, who manages to help the overtaxed peasants behind his boss's back. When Saluste decides to resume meddling in the monarch's affairs using Blaze as his henchman, his schemes backfire badly. ~ Clarke Fountain, Rovi

Gabriele Tinti
as Cesar
View All

There are no critic reviews yet for La folie des grandeurs (Delirios de grandeza) (Delusions of Grandeur). Keep checking Rotten Tomatoes for updates!

There are no featured audience reviews yet. Click the link below to see what others say about La folie des grandeurs (Delirios de grandeza) (Delusions of Grandeur)!