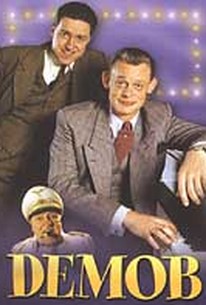 Two British war buddies who exceeded at entertaining their fellow troops on the battlefield attempt to take their act to the stage after being demobilized and returning to civilian life in this comedy starring Martin Clunes and Griff Rhys Jones. When fighting was at its most intense, Captain Ian Deasey (Jones) and Lance Corporal Dick Dobson (Clunes) played the clowns in order to raise the morale among their combat weary fellow soldiers. After four long years in the deserts of North Africa, however, Deasey and Dobson return to London, and realize they're not ready to stop entertaining. Before long, they're drawing big crowds at the Blue Parrot nightclub. But life back home is a bit more complicated than it was when they were in the military, and just as they're on the verge of breaking big, the two lovable buffoons find reality threatening to silence the laughter for good. ~ Jason Buchanan, Rovi

There are no critic reviews yet for Demob. Keep checking Rotten Tomatoes for updates!

There are no featured reviews for Demob at this time.