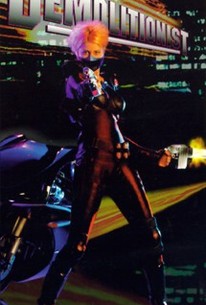 Set in a future American metropolis, Metro City, this sci-fi-thriller features a policewoman heroine who like the hero in Robocop was brought back from the dead and turned into a super-human fighter. Unlike the aforementioned robot-man, however, she is brought back not with hardware, but with special drugs and a heavy duty training program. The woman dislikes the drugs because of the nightmares they create, but she is dedicated and so completes her regimen so successfully that she is called the Demolitionist and sent out to clean up the city's crime-fouled streets.

David Anthony Marshall
as One Eye

Laser
as The Negotiator

Walter C. Hubbard
as The Hubb

Critic Reviews for The Demolitionist

The Demolitionist is so much fun and isn't even really a "so bad it's good" sort of a movie. It's good.

An ambitious but fatally derivative and tepid sci-fi thriller.

Audience Reviews for The Demolitionist

Nicole Eggert is a bright femme fatale as "Robo-Babe" in this cheesy yet satisfying action-thriller set in the near future.