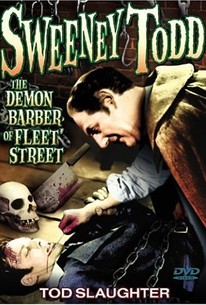 Adapted from the "Sweeney Todd" legend, Tod Slaughter plays the maniacal barber who slits his customer's throats and dumps the bodies into a basement, to be robbed and synthesized into meat pies sold at a bakery next door. The horror film is a British production from 1935, released to American theaters four years later.

Jonathan Singer
as The Beadle

John Singer
as The Beadle

Billy Holland
as Parsons, the fence

Ben Sonten
as The Beadle

There are several inconsistencies in the development of the plot, but a certain amount of the necessarily gruesome atmosphere has been caught and the story itself is so good that the film has some success.

All of [the creaky storytelling] fades to nothing but dim shadows, eclipsed by the glorious villainy of Todd Slaughter.

It's, well, a cut above most other musicals.

Terrific Tod Slaughter barnstormer. Not his best, but his most famous.

I am hitting a streak of really good old movies here. Sweeney Todd from 1936 is a really fantastic little film. My only experience with Sweeney Todd is Kevin Smith's Jersey Girl and Tim Burton's Sweeney Todd with Johnny Depp. I didn't really care for the Tim Burton version though. This movie is about a barber in England who kills his clients by launching them into his dungeon-like basement. I guess they break their necks or something like that. It is hinted that his victims end up in pies that are baked by his neighboring business partner, but never explicitly displayed. The two seem to be getting away with it until jealousy rears its ugly head and the relationship starts to strain. The movie doesn't do a really good job of establishing a connection between the pie maker lady and ol' Todd, however, you get the point. The thing that I liked most about this movie would be the way that Tod Slaughter (what a name right?) portrays a really imposing figure as the titular character; he is like the Leatherface of jolly old England. You don't get to see what he does to his victims but throughout the film you get the idea that he slit's his victims throats. He is always talking about how beautiful his straight razor looks against the victim's neck, its really creepy. Other great performances come from little Johnny Singer and Stella Rho both of whom play their parts to a T. If you are looking for a musical or fun dance-ish version of Sweeney Todd you are going to have to look elsewhere. This is a straight forward horror movie with no frills and the intro and outro are amazing. The movie has little hangups but in short it ranks right up there with Bride of Frankenstein as being one of the greatest horror movies of the 1930's. Suggested viewing: Sweeney Todd (2007) - Tim Burton (just watch this one for the storyline) Rating: 8 of 10 Favorite Quote: "May I polish you off sir?" S!D

I saw this on TV, but I only caught the end, which didn't look so great. I'd really like to see the whole movie now, since I am a fan of Tod Slaughter, and he has such an appropriate name for the movie.

I personally like the remake of this much better. This is kind of weak in that he just takes their money. Making them into meat pies is much better and much more twisted!

It's closer to the original penny dreadful than Stephen Sondheim's musical. As far as I'm concerned, that's a bad thing. Sweeney's a pretty two-dimensional character with pretty shallow motivations in this incarnation, and Tod Slaughter's campy performance doesn't help. Might be worth a look-see for those interested in the character's roots, especially if they're on a tight budget (it's in the public domain). But for those of you who like your Sweeney a little more sympathetic, pass on this one.