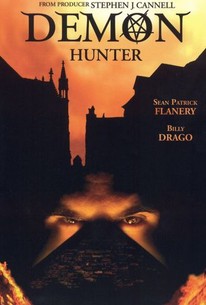 A demon has come to Earth to force possessed women to bear its children, and it's up to a half-human/half-demon hybrid to save the human race in Earth vs. the Spider director Scott Ziehl's dark tale of satanic terror. As possession sweeps the land and the population of the planet lies helpless to defend themselves against the growing supernatural forces that surround them, the offspring of a demon and a human (Billy Drago) must fight to ensure the human race remains free from the murderous influences of Satan's minions.

Charles Howerton
as Inquisitor No. 1

Michael Worth
as Brad, The Cop

...it doesn't take long for the movie to sink into irrelevance...

Stolen plots, stupid stories, and silly monsters I can take, but there's no damn reason a 75-minute movie should feel like 275.

Like Blade Runner but with the replicants replaced with demons... and it's shit. Pretty much a carbon copy of many other Zone Horror TV films. It has it's fun moments and you can really relish in the poor moments if you enjoy the sort of self harm watching as I. Some generic kung-fu fights, filthy ladies who get naked and a leather clad protagonist. Tries to address issues such as morality but fails. Poor dialogue distracts from a poor screenplay in general so there's no escape. Still I was certainly enthralled when the strangely attractive nun changed in the last ten minutes. Bizarre.

This movies was SO disappointing, especially because it held such promise. When I was watching this, all I could think about was how much better it could have been. The characters were wasted where there could have been depth, there was clumsy fighting where there could have been finesse, or at the very least graceful dialogue. I even found this film vaguely misogynistic, with none of the female characters having any internal merit. Plus I hated the main character. If this was remade by someone with a brain, I might be interested in that movie, but this one is a total failure.

Sean Patrick Flanery delivers a cool Steve McQueen-ish kind of performance as a rogue half-demon spawn who works for the church hunting his own kind on Earth in this hell-thriller film.