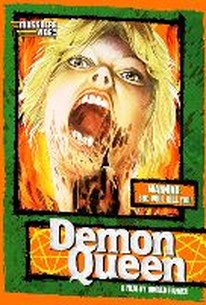 The Demon Queen is played by Mary Fanaro. She's demonic, yes, but she has more in common with Dracula than Satan. Mary is a vampire, preying upon handsome, susceptible men. Several murders later, she herself is disposed. The production values of Demon Queen are not this film's long suit: it scores best on its sudden shocks.

There are no critic reviews yet for Demon Queen. Keep checking Rotten Tomatoes for updates!

There are no featured reviews for Demon Queen at this time.