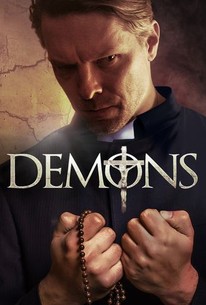 Eight years ago, Father Colin Hampstead oversaw an aborted exorcism that resulted in the gruesome death of seventeen-year-old Jewel Grant, in rural Louisiana. The deceased girl's older sister, Kayleigh, grew immediately attached to Hampstead and sought him out, at first for grief counseling and then, for much more. Eight years later, Hampstead has left the priesthood and become a celebrated fiction writer, specializing in stories about the occult, and he and Kayleigh, now his wife, have a beautiful daughter and run a well-known bed and breakfast in Savannah, GA. When the couple agrees to host a wedding for one of Colin's college friends, what begins as a Big Chill-type reunion turns into something much more macabre, as the seemingly omnipresent ghost of her dead sister Jewel compels Kayleigh to engage in bizarre, destructive behaviors that endanger the lives of both her friends and herself.

Megan Few
as Emmie
View All

Demons has spunk, the weightiness of the themes being explored startlingly complex. It's still pretty rough around the ages.

The ambitious auteur is getting better at making his novelistic ideas punchy and cinematic, but "Demons" is still a B-movie that takes itself too seriously.

I can get behind movies of any quality that are made with passion, but I just whiff too much cynicism here to really give the filmmakers a lot of credit.

Demons has potential, but the fractured storytelling, plodding pace, and bad acting from half the cast thwart its ambitions.

Demons is a great ride, ostensibly silly but with a lot more darkness underneath the surface.

"Demons" ultimately comes up short, but Doleac goes down swinging.

Demons is not about what Demons is about. A novel approach, just wish it had been a good movie too.