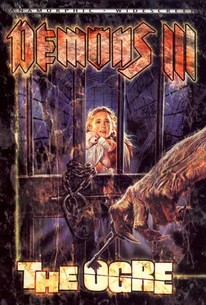 As a child, Cheryl (Virginia Bryant) was haunted by dreams of an evil monster, but now that she's grown up, the horror novelist is finding the old nightmares are beginning to come true in this creepy flick from director Lamberto Bava. The terror reaches another level when Cheryl's young daughter is taken captive by the ogre she thought only lived in her mind and her books. A sequel to Bava's Demons 2 in name only, The Ogre: Demons 3 also stars Patrizio Vinci and Alice Di Giuseppe.

There are no critic reviews yet for La casa dell'orco (Demons 3 - The Ogre). Keep checking Rotten Tomatoes for updates!

Well the first clue should be that its called Demons III: The Ogre. It's the same rip as Troll II except it was goblins. It has the wonderful look and sound of an Italian film with some untypically decent dubbing but it lacks the one thing that make Italian horror movies so great: the over the top violence. It wasn't until after that I found out this was made for Italian TV so that explains the lack of gore or nudity which makes for a long, boring snoozer.