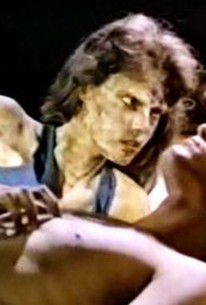 Moronic teens vacationing in Demonwood Forest are terrorized by a shambling Neanderthal -- not the director, but a big goon in a fuzzy ape suit who attacks George Kennedy and hauls his daughter off into the woods to a fate worse than death... perhaps to a screening of this movie. As it turns out, the rampaging beastie (which looks like a soiled feather-duster on legs) is not the local monster of mountain legend but merely a front for the subterranean activities of a cult of devil-worshipping aliens (they could have just called the tabloids if they needed better PR), who pass the time turning the locals into zombies... not a difficult task, especially with this brain-dead bunch. Cheap sets, dime-store costumes and Dinner Theater thesping lend a certain chintzy Ed Wood charm to the proceedings, but even this level of absurdity can't cover up the fact that the film's investors -- to say nothing of the audience -- probably felt profoundly rooked.

There are no critic reviews yet for Demonwarp. Keep checking Rotten Tomatoes for updates!

There are no featured audience reviews yet. Click the link below to see what others say about Demonwarp!