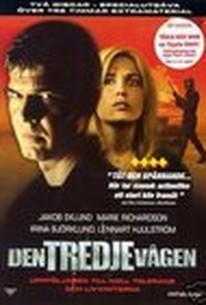 Written and directed by Anders Nilsson, Den Tredje Vagen is the Swedish filmmaker's third and final film in his trilogy centering on tough cop Johan Falk (Jakob Eklund). This time around, Falk has decided to seek out a more peaceful life. He's left the police department and intends to move away from the city. Things don't go quite as planned, however, and Falk once again finds himself embroiled in a fast-paced, bullet-riddled adventure. Released as The Third Wave in English-speaking markets, Den Tredje Vagen was preceded by 2001's Livvakterna and 1999's Noll Tolerans. ~ Matthew Tobey, Rovi

The best action movie made in Sweden since Bo Widerberg's 1976 The Man on the Roof.

There are no featured reviews for Den Tredje Vågen (The Third Wave) at this time.