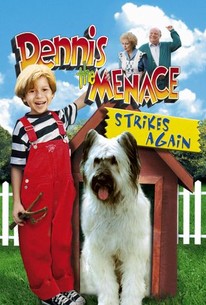 Danny Breen
as Fireman No. 1

Brooke Candy
as Girl at Diving Board

Darrell Harris
as Fireman No. 2

George Wendt
as Cop
View All

There's a nugget of a fairly entertaining family movie in here, somewhere, but there are just too many shortcomings to make it enjoyable to viewers outside of the target age group.

I didn't like this sequel, the first one was so much better, especially because of the great cast. And this one changes that cast. The story is more predictable and dull too. Overall it's just okay.

This is a sequel to the Dennis the Menace movie. The sad thing is that none of the actors from the first movie are acting in this movie, what a shame. I thought the first movie was charming and funny but this one clearly goes way over the line of being just plain silly and pointless. If you liked the first movie I wouldn't recommend you to watch this one because this one is nothing like the first one. I just don't understand why they would even bother making a sequel to this movie when they know that its going to be this bad.

Typical Dennis the menace antics. Kids will like this but really Don Rickles is the only reason to watch.

Don Rickles is no replacement for Walter Matthau as Mr. Wilson. This movie is impossible to get through. Even with Betty White.