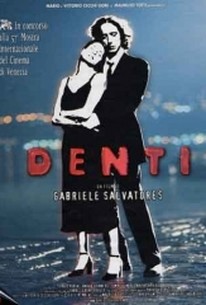 In this bizarre and darkly comic fantasy, Antonio (Sergio Rubini) is a man who was born with unusually large incisors; his freakishly huge teeth make him an outcast from his peers as a child, and he attempts more than once to break off the offending choppers. The emotionally fragile Antonio was further devastated at the age of 12 when his mother (Anouk Grinberg) died, and as a man, he's become obsessive and controlling in his relationships with women. Antonio is convinced that his girlfriend Mara (Anita Caprioli) has been unfaithful to him -- with her dentist (Tom Novembre), of course. After Antonio confronts Mara in a moment of anger, she responds with rage, and strikes him in the face with a large ashtray, breaking off one of his teeth. Antonio now must travel across the land, going from dentist to dentist in search of someone who can make a crown that will suit his extra-large smile. Denti was shown in competition at the 2000 Venice Film Festival. ~ Mark Deming, Rovi

There are no critic reviews yet for Denti (Teeth). Keep checking Rotten Tomatoes for updates!

There are no featured reviews for Denti (Teeth) at this time.