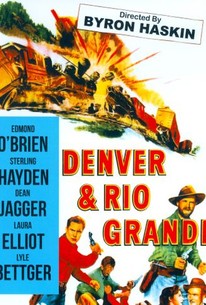 The Denver and the Rio Grande is one of two rival railroad lines, pitted in a race across the Rockies. Whoever arrives at their destination first will win a valuable contract. Edmond O'Brien is chief engineer of the D & RG, while Sterling Hayden is the less reputable man at the throttle for the Canyon City and San Juan line. The climax involves a head-on crash between two actual trains, a fact that earned the film plenty of press coverage back in 1951. Director Byron Haskin keeps things moving so rapidly that we scarcely have time to ponder the script's many cliches.

There are no critic reviews yet for Denver & Rio Grande. Keep checking Rotten Tomatoes for updates!

Breathtaking scenery and old pros ZaSu Pitts and Dean Jagger help but this is mediocre at best with a surprisingly hammy O'Brien.