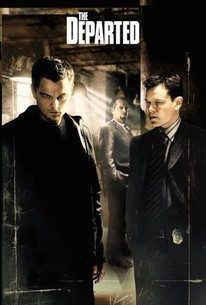 Critics Consensus: Featuring outstanding work from an excellent cast, The Departed is a thoroughly engrossing gangster drama with the gritty authenticity and soupy morality we come to expect from Martin Scorsese.

Critics Consensus: Featuring outstanding work from an excellent cast, The Departed is a thoroughly engrossing gangster drama with the gritty authenticity and soupy morality we come to expect from Martin Scorsese.

Critic Consensus: Featuring outstanding work from an excellent cast, The Departed is a thoroughly engrossing gangster drama with the gritty authenticity and soupy morality we come to expect from Martin Scorsese.

Legendary director Martin Scorsese takes the helm for this tale of questionable loyalties and blurring identities set in the South Boston organized crime scene and inspired by the wildly popular 2002 Hong Kong crime film Infernal Affairs. As the police force attempts to reign in the increasingly powerful Irish mafia, authorities are faced with the prospect of sending in an undercover agent or seeing their already frail grip on the criminal underworld slip even further. Billy Costigan (Leonardo DiCaprio) is a young cop looking to make a name for himself in the world of law enforcement. Collin Sullivan (Matt Damon) is a street-smart criminal who has successfully infiltrated the police department with the sole intention of reporting their every move to ruthless syndicate head Frank Costello (Jack Nicholson). When Costigan is assigned the task of working his way into Costello's tightly guarded inner circle, Sullivan is faced with the responsibility of rooting out the informer before things get out of hand. With the stakes constantly rising and time quickly running out for the undercover cop and his criminal counterpart, each man must work feverishly to reveal his counterpart before his identity is exposed by the other. Martin Sheen, Alec Baldwin, and Ray Winstone co-star, and writer William Monahan adapts a screenplay originally penned by Alan Mak and Felix Chong. ~ Jason Buchanan, Rovi

Armen Garo
as Providence Gangster No. 1

John Cenatiempo
as Providence Gangster No. 2

Tracey Paleo
as Darlene the Secretary

Sallie Toussaint
as Woman at Opera

Peter Welch II
as Other Prisoner

Thomas B. Duffy
as Governer

Critic Reviews for The Departed

The biggest draw, of course, are the star acts: Caprio, Damon and Mark Wahlberg in particular are electric.

The Departed is an example of a cinematic master seeking to live up to the veneration with which he is regarded by his pupils.

Not only is The Departed not among the best of Scorsese's films; it's not even the best version of this film.

Nicholson is on good-to-great form as the paternal brute, and lends an inimitable relish to certain lines in William Monahan's screenplay.

As in his remake of Cape Fear, Scorsese has mucked up a B-movie he professes to love: producing something full of twists but devoid of that lovely, fluttery, rare thing: surprise.

Scorsese claims to be appalled by the violence in life and in his own films, yet he continues to glamorize sociopaths.

Just might be Scorsese's most complex, well-balanced gangster flick.

While Nicholson steals the film's long set-up, the second half of The Departed becomes a psychologically taut battle of wits and nerves between Billy and Colin...

Danielle Solzman
Solzy at the Movies
View All Critic Reviews (284)

Audience Reviews for The Departed

This is just too awesome.

There are lots of things I didn't like about this movie, namely the entire cat-and-mouse plotline. How could neither Billy Costigan nor Collin Sullivan nor anyone else not figure out that those two are the double agents? It seemed pretty common knowledge that Collin grew up under the wing of Frank Costello and that bad shit keeps happening after Billy joins Costello's mob. Is Costello really that trustworthy and critical a thinker to believe correlation doesn't equal causation? The alliterative names are also confusing. I'm not a fan of early-aughts Marty or Leo, but Leo isn't bad in this role. Matt Damon's face and voice are too boring to play a villain, Martin Sheen's character is pretty thankless and dies easily, and Marky Mark's character is just a dick for the sake of being a dick - hardly enough meat to develop an Oscar-worthy performance. The only female character is just there to form a slapdash love triangle, and the script doesn't even write her as a realistic psychologist.

This was a great movie from beginning tp the final minutes and than i felt rushed. Very rushed, Im not sure why but the final 30 minutes or so just were overdone. But in the end still a great movie.