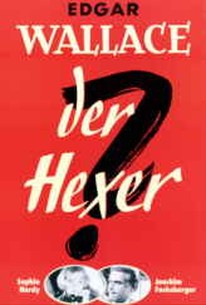 The crime novels of Englishman Edgar Wallace have been adapted into several dozen movies, possibly more in Germany where they were enormously popular for a very long time. Though the author died in 1935, he has been given "screenwriter" credits on a great many of these films. Der Hexer is based on one of his more popular and critically acclaimed works, The Squeaker, which also gave rise to an English film in 1930. In the story, a supposedly respectable man is forced to murder his lovely secretary when she finds out too much about his real business, which is white slavery (forcing women into prostitution). The girl's brother comes from Australia to find out what happened to her and goes on a rampage against the criminals, confounding the increasingly dismayed functionaries in Scotland Yard. Not only is he impinging on their turf, but they are unable to discover who he is. Meanwhile, he must evade not only the police, but the powerful criminals he is working against. Thanks to some fancy plotting by the filmmakers, even readers of the original novel will not be able to guess his identity. ~ Clarke Fountain, Rovi

There are no critic reviews yet for Der Hexer (The Mysterious Magician) (The Ringer) (The Wizard). Keep checking Rotten Tomatoes for updates!

There are no featured reviews for Der Hexer (The Mysterious Magician) (The Ringer) (The Wizard) at this time.

Der Hexer (The Mysterious Magician) (The Ringer) (The Wizard) Quotes