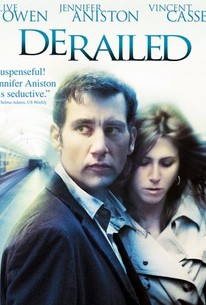 Critics Consensus: With miscast stars, a ludicrous plot and an obvious twist, Derailed embodies its name all too aptly.

Critics Consensus: With miscast stars, a ludicrous plot and an obvious twist, Derailed embodies its name all too aptly.

Critic Consensus: With miscast stars, a ludicrous plot and an obvious twist, Derailed embodies its name all too aptly.

A married Manhattan ad man, Charles Schine, falls in lust with a sexy younger woman he meets on his commuter train, but when they meet in a hotel it goes terribly wrong. An armed man bursts in, beats Charles, rapes his date and then blackmails Charles for a staggering amount of money. Charles tries to fight the blackmail by hiring muscle, a disastrous move that gets him into potentially dire legal trouble, as does his agreeing to participate in a company scam in a desperate bid to make back some of the blackmail money.

Denis O'Hare
as Jerry the Lawyer

Dennis O'Hare
as Jerry the Lawyer

But, beginning to end, this is Clive Owen's show and the man who should have been James Bond dominates the screen like a Bengal Tiger slowly sharpening his claws.

Derailed never fully engages our sympathies. I think that's because it's difficult to swallow Owen as anything other than eminently resourceful.

Yet another in the seemingly endless line of stupid, generic thrillers that Hollywood foists upon the movie-going public.

All of Owen's problems would go away if he just went to the police.

Someone had to work extra hard to make a movie this bad with two likeable leads like Mr. Owen and Ms. Aniston. I can't figure out why.

It has a great look, a couple of genuinely terrifying turns and a surprise or two that I didn't see coming. This is a flawed but stylish and entertaining thriller.

...a perpetually watchable yet undeniably generic thriller that benefits from its raft of compelling plot twists and relatively engaging performances...

A poor schmuck's History of Violence

Talent is involved everywhere in Derailed, and it all gets trashed in the final reel for the sake of teasing and then appeasing a bored November audience.

One of those forgettable efforts that's neither bad enough to completely dismiss nor good enough to wholly recommend.

The only thing harder to believe than someone falling for so obvious a ruse is for that same someone to have any chance of getting even for it.

What finally derails the movie is that it thinks it's a lot smarter than it is.

The fear of the inner city dirt and grit and slime exploited bigtime with this cautionary tale about a innocent and naïve businessman (?!?) seduced into an affair that explodes in his face quite literally. Everyone performs okay, only wanting for common sense from the script in this okay thriller.

Rewatched last night after many years. I actually could remember the twist in this one, and actually it's glaringly obvious anyhow, which I don't recall it being first time around. Still a good movie. Jennifer Aniston does a good job here. And quite different to some of the fluff she's normally associated with (not a criticism - I've enjoyed a lot of it over the years. I actually do think she's a good and quite versatile actress). I did have to suspend disbelief quite a few times with some of the things that happen- seemed way too easy. Particularly what happened at the very end - as if someone would get away with that. Ditto to the hotel scene (second one). But decent thriller. Well cast and looks good.

So I was gonna watch the JCVD thriller called 'Derailed' but after the first five minutes I realised I had the wrong film haha so I stuck with this despite Aniston being involved. Honestly I was pleasantly surprised with this thriller, you don't think its a thriller and you don't see the quite decent twist in the plot, but its actually pretty good. I won't go into the plot for fear of spoiling it but its all about double cross, setups, scams...basically naughty lying laced with blackmail. Bottom line the film is carried by an excellent performance from Cassel who is really quite evil looking and convincingly aggressive. His scrawny frame is deceiving as is his change in character to get into Owen's life which gives him the kind of presence that sends shivers down your spine, the fact that he won't stop makes him nasty and scary. Owen does a good job as the husband in dire straits as he battles against the demands of Cassel's character, he looks the everyman and plays it well. Unfortunately Aniston simply cannot shake her comedic background and just cannot convey a decent performance in drama as far as I'm concerned, she just isn't convincing, purely a TV actor period. For some reason someone thought the casting of 'Xzibit' and 'RZA' was a good move for this film, errrr no, they add nothing in their roles and I don't understand why they were even considered when simple more toned down characters would have been better. And can someone explain to me whenever these 'musicians' are cast in films the end credits always seem to role with a lame rap song? is that part of their deal or something!? completely wrong choice of music for the end credits here, totally ruins the feel. From a slow start which feels like its gonna be crap to a pretty good thriller which does get you involved as the plot gets deeper. I didn't see the plot U-turn and it really makes things interesting as you root for Owen's character, before that its a little annoying as you tend to blame Aniston for his ever mounting problems but after the twist you see why.

Thoroughly enjoyed this from start to finish, good performances alll round, particularly from Vincent Cassel, but more shockingly, a good performance from Jennifer Aniston as a serious role. I watched this film, knowing nothing about it and having not even seen a trailer and I'm glad, because I had no expectations of it and it left it unpredictable.