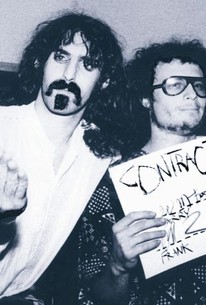 Larry "Wild Man" Fischer was a wildly eccentric singer who in 1968 was discovered on the streets of Hollywood by Frank Zappa, who was intrigued by Fischer's offer to write and perform original songs for passers-by for a mere ten cents each. After hearing a few dollars' worth, Zappa offered Fischer -- who had been wandering the edges of the music business for several years, with no success -- a recording contract, and in 1968 the album An Evening With Wild Man Fischer was released. Sometimes funny, sometimes harrowing, and always boasting Fischer's wobbly matter-of-taste voice and adult-child songwriting, the two-LP set of oddball tunes (including "Merry-Go-Round," "Monkeys vs. Donkeys," "Are You From Clovis," and "The Rocket Rock") sold only modestly, and after an altercation at Zappa's home, Fischer soon found himself without a record deal. While he remained a favorite among a tiny cult of admirers, Fischer was difficult for most folks in the music industry to deal with -- he'd been diagnosed as both a manic-depressive and a paranoid-schizophrenic, and his extreme mood swings, obsessive need for attention, and inability to conform to societal standards of public behavior have kept him at the sidelines of show business as a freak talent, when his abilities are acknowledged at all. But there are a number of people who know music and believe Fischer is a genuine talent, including legendary big band singer Rosemary Clooney, soul icon Solomon Burke, Devo leader Mark Mothersbaugh, and music historian and disc jockey Dr. Demento. Derailroaded: Inside the Mind of Larry "Wild Man" Fischer is a documentary which offers a look at Fischer's torturous childhood, his strange adventures in show business, his struggle to be heard, and his constant battle with his own demons; the film includes interviews with Fischer and his admirers, as well as vintage performance clips (including his appearance on Laugh-In).

This sensitive, informed and ultimately melancholic bio-doc sums it up very eloquently indeed.

While there is an odd sense of artistic purity in Fischer's music, Derailroaded never really answers the aforementioned question. Which is exactly how it should be.

You don't have to be crazy to sing like Larry 'Wild Man' Fischer -- subject of Josh Rubin's reverential documentary Derailroaded -- but it helps.

You don't have to be a fan of Larry 'Wild Man' Fischer's batty songs to appreciate Josh Rubin's compassionate portrait.

While heartbreaking and indirectly depressing, Derailroaded: Inside the Mind of Larry "Wild Man" Fischer is also a very fine documentary indeed.

Both fans and the indifferent will enjoy the strange, strange story of Fischer's life.

In spite of its sympathy, Derailroaded veers into reality-TV voyeurism.

As with all great documentaries, Derailroaded challenges its audience to do some heavy soul-searching.

Best for fans of outsider music.

This in-depth documentary is a loving tribute, an entertaining yet tragic tale, of a true singer-songwriter.

I went into this film knowing absolutely nothing of the man known as Larry 'Wild Man' Fischer. By the time of the end credits I was definently a convert of this man's extroardinarily bizarre, creative and primal music though. A true originator of Outsider music, throughout his career he worked with many big names (most notably Frank Zappa) but his career was always plauged by his manic depression and his paranoid schizophrenia. The film contains excellent interviews with Frank Zappa, Zappa's Wife, Dr. Demento, Wierd Al Yankovic, Barnes and Barnes, Devo, Family members etc. At times this film is very funny, and at other times it's heart breakingly sad. Definently a touching portrait of a difficult man, and one not to be missed for fans of outsider music. That being said, as with all outsider music, these songs won't appeal to the majority of people. While the music is emotionally engaging, often catchy, always heartfelt and sincere, less adventurous music fas will just feel alienated from it. If you enjoy boring msic like The Beatles or Coldplay or the fucking Eagles you probably won't like his music. Even still as a documentatry it is very well done and there are no complaints there. Recommended.