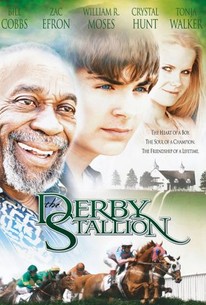 A teenage boy develops a sense of purpose and some new friends through an unlikely alliance with a aging musician and his horse in this drama for the whole family. Fifteen-year-old Patrick McCardle (Zac Efron) is the son of a former professional football player, Jim (William R. Moses), who wants his boy to follow in his footsteps as an athlete. But Patrick has never had much aptitude or interest in football, baseball, or track, and doesn't feel especially close either to his father or his classmates at school. Patrick has struck up a friendship with Houston Jones (Bill Cobbs), an elderly blues musician who likes to drink and tell stories, but Jim considers Jones a bad influence and Patrick avoids telling his father about the time they spend together. In his younger days, Jones was a jockey and horse trainer, and when he rescues an injured race horse, Jones is convinced the animal has what it takes to be a winner again. Jones sets his sights on entering the horse in the State Cup Steeplechase Race, and Patrick becomes his right hand man, along with Jill (Crystal Hunt) and Chuck (Rob Pinkston), two new kids who have just moved into town from the big city. With only six weeks before the race, can Jones and his three young assistants turn an underdog into a champion?

Billy Preston
as Will Gentry
View All

Critic Reviews for The Derby Stallion

Audience Reviews for The Derby Stallion