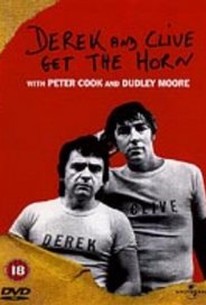 Russell Mulcahy (of "Highlander" fame) films British comedy luminaries Peter Cook and Dudley Moore recording their last comedy album featuring two of their most beloved characters, lavatory attendants Derek and Clive. Booze, drugs, strippers and practical jokes (sometimes bitter and sick on the part of Cook) are provided. Throughout the recording, Moore has to weather the abuse and disdain of his longtime partner in the wake of his success in the American market (with films like '10' (1979) and Foul Play (1978)). The film marked the last appearance of Peter Cook and Dudley Moore together as a team and the end of their partnership which began with "Beyond the Fringe" in 1959. The men discuss "getting the horn" (i.e. getting "in the mood") at the most unlikely times, improvise songs filled with obscenities (Cook's two-note piano opus entitled "Dutch Bitch" is coarse and hilarious to those who are not easily offended) and work out their aggressions toward one another in the strangest ways, in the midst of putting the album together. They engage in all-out war and undeniable camaraderie.

Critic Reviews for Derek and Clive Get the Horn

There are no critic reviews yet for Derek and Clive Get the Horn. Keep checking Rotten Tomatoes for updates!

Audience Reviews for Derek and Clive Get the Horn

There are no featured audience reviews yet. Click the link below to see what others say about Derek and Clive Get the Horn!

Derek and Clive Get the Horn Quotes