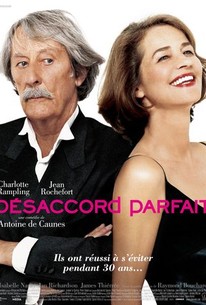 An addition to the subgenre of neo-screwball comedies, à la Seems Like Old Times and Illegally Yours, Antoine de Caunes' French-language farce Twice Upon a Time (aka Désaccord Parfait) observes the long-delayed reunion between two former lovers. Alice (Charlotte Rampling) is a British stage actress, Louis (Jean Rochefort), a Gallic film director of cult movies. The two broke up in the late '70s, but now they experience a sudden and startling rekindling amid witty verbal duels. Throughout, the director takes satirical potshots at everything from Canadians to French cinema to gay Englishmen. ~ Nathan Southern, Rovi

Critic Reviews for Désaccord parfait (Twice Upon a Time)

There are no critic reviews yet for Désaccord parfait (Twice Upon a Time). Keep checking Rotten Tomatoes for updates!

Audience Reviews for Désaccord parfait (Twice Upon a Time)

Usually I really like movies about relationships. And that is what this movie is -- about rekindling a 30 year old relationship. But I didn't see enough of a point behind making the movie -- maybe it was because I could not identify with either of the two main characters.