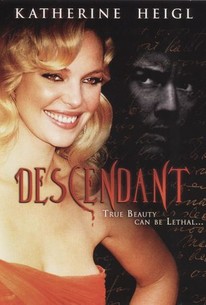 The directorial debut of filmmaker Kermit Christman, Descendant is a straight-to-video thriller infused with the spirit of Edgar Allan Poe in more ways than one. Party of Five's Jeremy London stars as Ethan Poe, a descendant of the legendary writer who is living in the elder Poe's footsteps and is attempting to finish his latest novel. Holed up in a small town to concentrate on writing, Ethan falls for a local girl (Katherine Heigl of Grey's Anatomy), but there's trouble in store for the both of them when the ghost of Edgar Allan Poe shows up.

There are no critic reviews yet for Descendant. Keep checking Rotten Tomatoes for updates!

There are no featured audience reviews yet. Click the link below to see what others say about Descendant!