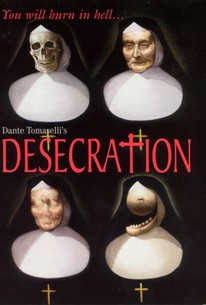 In this offbeat and original horror opus, 16-year-old Bobby has been traumatized both by the death of his mother at an early age, and a brutally repressive Catholic upbringing. After Bobby accidentally causes the death of a nun, the boy finds himself sent to Hell, where he encounters his mother and causes a chain-reaction of terrifying spiritual and supernatural consequences. Desecration was the debut feature for 30-year-old auteur Dante Tomaselli.

A wildly ambitious first feature whose lush visuals belie the fact that it was shot on 16mm for a mere $150,000.

Tomaselli managed to direct one hell of an atmospheric movie on a low budget.

This horror film for it's budget wasn't so bad,it manage to deliver few bloody scenes & creepy imagery that looks like a nightmare which helps to create a creepy atmosphere but the film tends to be slow in parts besides some odd moments at times.