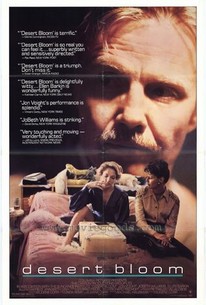 A nuclear bomb explodes along with a nuclear family in Eugene Carr's coming-of-age drama Desert Bloom. The film is set in the arid outskirts of Las Vegas in 1950. Thirteen-year-old Rose Chismore (Annabeth Gish) has just received her first pair of glasses and now begins to see her family and her environment much more clearly. Under the shadow of an impending atmospheric testing of an atom bomb, Rose's family frays under emotional and cultural changes. Rose's father Jack (Jon Voight) is a battle-scarred veteran of World War II who runs a gas station and drinks too much. Her mother Lily (JoBeth Williams) is a cheery housewife addicted to platitudes and gambling. Jack, lonely and depressed and drawn to his blossoming daughter, reacts to his incestuous attraction by blackening her eyes. Into this unhealthy mix comes Aunt Starr (Ellen Barkin), a glamorous and independent woman who comes to live with the family for the 42 days necessary to obtain a quickie divorce. Rose, with her luminous sensuality, begins to entice all the local wolves, along with her brother-in-law Jack.

Forced as it sometimes seems, and inconsequential by turns, Desert Bloom is a handsome movie, and it's beautifully detailed.

Desert Bloom contains the material for a very good film and it certainly contains the performances, but it moves in too many directions and contains too many issues.

Now, it's fine for a movie to be earnest, and Julio Gallo, for that matter, but it does make "Desert Bloom" rather a slog.

A strong cast led by Jon Voight backs Gish in a story that pulls a great deal of its elements from its distinctive Nevada setting...

I don't know whether it is this marketplace reality, or a general lack of human understanding, that made so beautiful a film as Desert Bloom into such an ultimately disappointing experience.

This sensitive coming-of-age tale is framed by the narration of its grown-up protagonist, recalling her childhood in the 1950s, an era defined by the A-Bomb and the culture it created.

a drama that stays with you; a good companion piece with "Blue Sky"

Manages to make clear that certain children possess the resiliency to handle the stress and pain of a troubled home.

There are no featured audience reviews yet. Click the link below to see what others say about Desert Bloom!