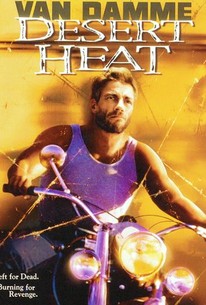 A group of bullies terrorizing a small town meet their match in the Muscles From Brussels in this action drama. Eddie Lomax (Jean-Claude Van Damme) is a drifter who has been in a suicidal funk since the death of his close friend Johnny (Danny Trejo). Riding his motorcycle into a small desert town where Johnny once lived, Lomax is confronted by a gang of toughs, who beat him and steal his bike. However, Lomax is not a man to take an injustice lying down, and soon he begins exacting a violent revenge on the men who stole his motorcycle, with local handyman Jubal Early (Pat Morita) lending a hand and several area ladies offering aid and comfort. Inferno (which was also released under the titles Desert Heat and Coyote Moon) was directed by John G. Avildsen, though Danny Mulroon is credited on some prints.

You've seen it before, so why bother seeing Jean-Claude Van Damme go through the paces in this straight-to-tape howler?

Oscar-winning director John Avildsen wisely removed his name in favor of a pseudonym on this forgettable direct-to-video Van Damme vehicle.

Doused by a mediocre plot and poor plot escapes.

This Van Damme dud almost warranted a "so bad it's good review," but then I realized it was just really, really bad. All this from the director of ROCKY no less?

Jean-Claude Van Damme's desert action is fine as the loner willing to call it a day when he is attacked by a biker gang. He finds a new reason for living when he vows to get even.

AROOOOO! HAHA COME AND GET ME!! *BLAM BLAM* /dies. Trejo's best role yet.