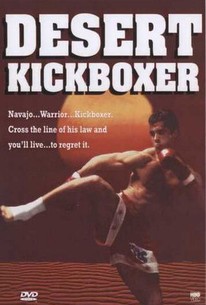 A kickboxing cop abandons the violent life after he accidentally kills his opponent during a match. After quitting, he heads for the Arizona desert to live alone and occasionally work tracking drug runners for the area sheriff. One particularly wily Mexican drug lord, Santos, has been a real thorn in tracker Joe Highhawk's side, so when he encounters the beautiful Claudia and her simpleton brother Anthony running for their lives because she, an accountant, embezzled $20 million from Santos, he decides to help them. This actioner follows what happens next. Along the way, they encounter all sorts of danger, and double cross until the exciting final standoff between the kickboxer and the villain.

There are no critic reviews yet for Desert Kickboxer. Keep checking Rotten Tomatoes for updates!

There are no featured reviews for Desert Kickboxer at this time.