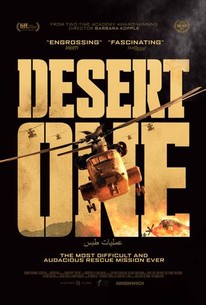 Critics Consensus: Comprehensive without getting bogged down in details, Desert One offers a fascinating look at a daring military mission that ended in defeat.

Critics Consensus: Comprehensive without getting bogged down in details, Desert One offers a fascinating look at a daring military mission that ended in defeat.

Critic Consensus: Comprehensive without getting bogged down in details, Desert One offers a fascinating look at a daring military mission that ended in defeat.

In April 1980, the US government launched the Operation Eagle Claw, their response to the hostage crisis that was happening in Iran at that time. Helmed by the then-president Jimmy Carter, the Delta Force tried to rescue the 52 hostages that were detained in the U.S. Embassy and Foreign Ministry buildings in Tehran. The documentary film Desert One explores the different aspects of this failed mission through interviews with the hostages, soldiers, commanders, and even President Carter. Directed by Barbara Kopple.

Critic Reviews for Desert One

You can learn a lot more from your failures than your rah-rah successes. Barbara Kopple is of course a veteran [filmmaker] and does this brilliantly.

[Barbara] Kopple is an impeccable documentarian.

Director Kopple has obtained never-before-heard audio of communications between Carter and the military command, and it's absolutely chilling to hear the president's reactions...

There's a powerful sense of you-are-there excitement to a lot of this testimony, even if Kopple's emphasis on Operation Eagle Claw tends to emphasize the American side of things in a way that isn't justified by the film's 360-degree approach.

Desert One, a superb documentary by Barbara Kopple, snatches high drama from the jaws of devastating failure.

Featuring an impressive breadth of interview subjects, there's a sense that the full story - or something very close to it - is being told in as objective a way as possible.

[T]here are so many stories, seen from such different angles, that we're left wondering what specific story the filmmaker wants to tell.

It felt a little bit dry to me. Having a lot of perspectives is good, but it means that you have a long series of talking heads... That said, it was worth watching.

Two time Academy Award winning filmmaker Barbara Kopple makes a film and you know that it is going to have several elements to it - excellence, education and entertainment.

"Desert One" is a comprehensive and informative documentary.

There are no featured reviews for Desert One at this time.