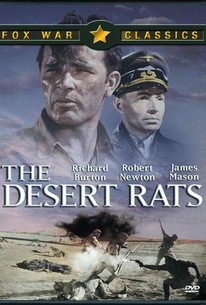 The Desert Rats was a quickly assembled follow-up to 20th Century-Fox's successful war film The Desert Fox. Richard Burton plays an officer in the British Eighth Army, battling Rommel's forces in defense of Tobruk. Put in charge of an Australian unit, Burton rides his men ruthlessly, with laudatory results. He is briefly captured by the Nazis and questioned by General Rommel himself, but Burton escapes to lead his surviving troops to safety. James Mason, who portrayed Rommel in The Desert Fox, makes a guest appearance in the same role in The Desert Rats. ~ Hal Erickson, Rovi

Critic Reviews for The Desert Rats

A sort of earlier-in-time sequel to Desert Fox, this is a Hollywood tribute to the defenders of Tobruk and has several satisfying moments.

Looks just like many other war films that salute the glories of war.

Audience Reviews for The Desert Rats

Sequel to The Desert Fox, based on the true-life exploits of Australian infantrymen in the North African campaign of WWII. James Mason is again Field Marshal Erwin Rommel, this time matching wits with Richard Burton during the legendary siege of Tobruk. A solid combat-action film typical of the genre throughout the 1950s and early 1960s.

A semi-sequel to The Desert Fox, The Desert Rats sees James Mason reprise his role as Field Marshal Rommel who meets his match in the form of British field officer Richard Burton during the siege of Tobruk. Mason and Burton are two of the greats of British acting and it's well worth seeing this film just to see them together, although the scene in which they meet is all too brief. In fact I'd like to have seen a lot more of Rommel who although is not as revered as in the previous film (for this one, he is the enemy after all) but is still shown as a figure to be respected. As a whole it's a rather old fashioned tale of boy's own derring-do rather than a gritty anti-war story, and if taken as such is very enjoyable. The old story of a grudging company of men learning to respect their new commander is hardly an original one but it's an exciting tale of wartime bravery shot in atmospheric black and white.