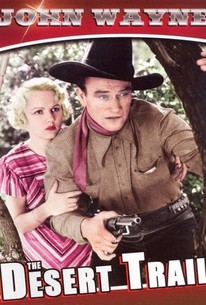 With the help of some strategically placed stock footage, John Wayne plays ace rodeo rider John Scott in the "Lone Star" western Desert Trail. After busting a few broncs (not to mention his back), John and his saddle pal Kansas Charlie (Eddy Chandler) head into town to deposit their paychecks. In a twinkling, the two chums are accused of bank robbery, and the chase is on, with John and Kansas in pursuit of genuine robber Jim (Paul Fix), while being pursued by Sheriff Barker (Lafe McKee). The plot rears its ugly head when our hero falls in love with Jim's sister Anne. The heroine is played by former "Our Gang" star Mary Kornman, a fine horsewoman in her own right (and future co-proprietor of the legendary Iverson Ranch).

There are no featured reviews for Desert Trail at this time.