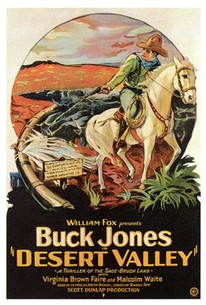 The Buck Jones western Desert Valley was directed by Scott Dunlap, Jones' business manager and longtime close friend. The star is cast as Montgomery William Fitzsmith, who despite his hoity-toity three-barreled name is one of the roughest, toughest galoots in the West. Upon his arrival in Desert Valley, Fitzsmith champions the cause of a group of cattlemen who are being cheated of their water rights. Deliberately breaking the law, he opens up a pipeline leading to the water supplies of villainous landowner Jefferson Hoardes Jr. (Malcolm Waite). When the father of heroine Mildred Dean (Virginia Brown Faire) is accused of this crime, Fitzsmith steps forth and confesses. The authorities give chase, but our hero eludes capture long enough to force the water-hoarding Hoardes into helping out his fellow man.

There are no critic reviews yet for Desert Valley. Keep checking Rotten Tomatoes for updates!

There are no featured reviews for Desert Valley at this time.