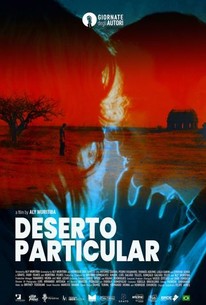 40-year-old Daniel has been suspended from active police work and is under internal investigation for violence. When Sara, his internet love affair, stops answering his texts he decides to drive north in search of her, starting on what is apparently a fool's errand. He shows Sara's picture around, but nobody seems to recognize the woman. Until eventually a guy pops up saying he can put the two in touch under very specific conditions.

This Brazilian drama is a welcome and assured intervention into that country's calcified ideals about desire and masculinity.

[His characters aren't] reduced to one-dimensional stereotypes. He draws them as equals insofar as their inability to fully embrace who they are away from external forces.

A beautiful and respectful approach to this love story.

Deserto Particular, a.k.a. Private Desert, bewitchingly explores the story of who we all are through Daniel and Sara.

[The] dramatic arc isn't forced at all. [Full review in Spanish]

A potent rejoinder to the hypermasculine, explicitly transphobic values of the Bolsonaro regime.

Brimming with electricity yet bathed in the transformative power of love.

This story of one man's search for an on line love is told with beauty and compassion.

Ricardo Gallegos
But Why Tho? A Geek Community
View All Critic Reviews (9)

There are no featured reviews for Deserto Particular at this time.