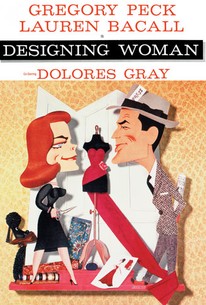 It's the love match of the century. In this corner, ultra-chic fashion designer Lauren Bacall. Her opponent is sloppily dressed sportswriter Gregory Peck. The two meet and amidst their sparring, love blossoms and marriage ensues. This sophisticated comedy, reminiscent of the old Spencer Tracy/Katherine Hepburn vehicles, follows the disparate couple as they try to make their unlikely union a winner. The obstacles they face include vengeful mobsters and a series of improbable misunderstandings. The gangsters are mad at the sportswriter because he has published a no-holds-barred series of exposes on corruption in boxing. The other troubles arise after the writer's ex-girlfriend and the designer's ex boyfriend show up in town. Both are eager see their old flames, neither of whom knows about the other. The supporting cast was unusually good, but Bacall's performance is particularly notable in the film, for though she played a comedy role in the film, her real life was full of tragedy, as during production, her long-time love and husband Humphrey Bogart was dying.

The uproarious "ravioli scene" is the movie's most famous interlude (Peck tribute shows often would employ it to demonstrate the actor's underrated comic chops), but there are plenty of memorable set-pieces in this effervescent effort.

This romantic comedy by Minnelli is very pleasant to me. [Full review in Spanish]

A sunny view of artistic self-awareness slicing past gaiety

This mildley entertaining comedy is a reworking of the superior Stevens' 1942 "Woman of the Year," with Gregory Peck in the Spencer Tracy role and Lauren Bacall in Katharine Hepburn's.

There wasn't much to chew on or laugh about in this stilted comedy.

Bright comedy, but nothing great

This is another silly romantic comedy with nothing new to offer. Peck and Bacall should have passed on this movie.

Rehash of Tracy's and Hepburn's Woman of the Year from 15 years before. Not a bad retelling. There are many funny observations. However, I like the chemistry, frazzled nerves, and rapid dialog of the movie with the classic couple better.

Designing Woman from 1957 starring the beautiful Lauren Bacall and the great leading man Gregory Peck. I have been wanting to see this film and finally watched it recently and loved it. The movie centers on a wealthy and very high scoiety lady (Bacall) and a very man's man (Peck). Both fall in love and marry quickly after meeting. Soon thereafter they find out through funny situations that they are very different but have one major thing in common the love for one another, can it rule all?

if you enjoy sophistication comedy which means comic tales about upper class people like those socialites blended with the elements of screwball comedy, and meanwhile you sorta like the old gangster style episode, "designing woman" would be a terrific choice to consume your evening tea time....meanwhile if you're not weary of the trivial emphasis of feminine extravagent constumes, you would embrace this flick with vigor. the storyline is complicated, a joulistist played by peck falls in love with a fashion designer played by bacall, then gets married immediately once the passion is torched, and he's having some discord over the gap of their social lives, and also he's busy concealing the fact of his ex girlfriend whom his wife suspects he's having affairs with, further his newspaper article infuriates a gangster lead who plans to send thugs to teach him a lesson....you could imagine..it's a comedy of errors and irreconcible ridicule between genders, as he would rather take all the troubles denying the existence of his ex than confide the truth to reclaim his fidelity. the wardrobes are all out of prestigous designer helen rose who even held a press conference to introduce the fashions in this flick. bacall's role was originally considered with grace kelly if kelly had not been transported to morocco as princess. the best pleasure of watching "designing woman" is the girlish amusement for dresses and those rosiness of high class lifestyle such as being a designer and a popular society queen, most of all, married to a dashing handsome man who is the man of men, gregory peck. of course, the premise is that you must have a slight acceptance of chic flicks, and this one has the right dose, one bit more would ruin the pleasant taste.