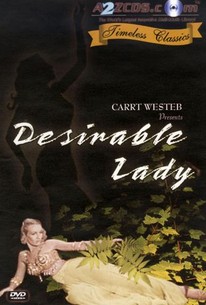 Eve Lorraine (Jan Wiley), an exotic dancer at a club, is arrested for allegedly performing in a manner intended to corrupt the morals of the community -- it turns out that her own boyfriend/publicist called in the complaint to the local precinct to instigate the arrest to get publicity for her act. Before Eve's troubles are over, however, she's going to find herself in deeper, hotter water as she gets roped into a plot to pass her off as a long-missing heiress. And soon, in addition to fraud, there will murder in the mix, and Eve will be at the center of the investigation.

Chester Conklin
as Waiter
View All

There are no critic reviews yet for Desirable Lady. Keep checking Rotten Tomatoes for updates!

There are no featured reviews for Desirable Lady at this time.