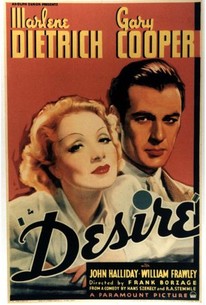 A beautiful, sophisticated woman uses her considerable charms to con a jeweler out of a pearl necklace worth a fortune. She, a notorious jewel thief, then heads for Paris, leaving a stodgy psychiatrist framed for her crime. She is careening toward the border in her car and passes a car driven by a vacationing American engineer, nearly forcing him off the road. Once at the border, the woman almost panics when she sees that the guards are checking luggage and purses. Quickly she slips the pearls into the waiting American's pocket. As soon as he makes it over the border, she is hot on his heels. Though she flirts with him from her vehicle, he is shy and ignores her. In desperation, she speeds ahead, stops and breaks her engine. Naturally he picks her up and together they go to San Sebastian, where her partner waits. Along the way, the American falls head-over-heels for the girl until he finds the purloined pearls in his pocket. He doesn't know that she has fallen deeply in love with him. Though she desperately wants to be with him, another member of her jewel-thieving ring tells her that her past will prevent all chances at romantic happiness. She lies to him and tells him that she has a husband and then admits her true vocation in hopes of scaring him away. Fortunately, he is not so easily frightened and by the story's stylish ending, the lovers are joyously reunited.

George MacQuarrie
as Clerk With Gun

Desire is a most unusual and extremely fertile example of artistic cross-pollination between two very different auteurs: Frank Borzage and Ernst Lubitsch.

Cooper is charming, hilarious, sweet - and that smile is so swoon-worthy. It's one of his best performances. Dietrich is enchanting. She gets to play at mysterious, sultry, seductive and, yes, she sings!

Not particularly known for comedies, director Frank Borzage made a sparking gem of one with 'Desire.'

Cooper catches the light note perfectly, and Marlene is brighter than in many recent efforts.

The superb Spanish scenery is handsomely photographed and so is the superb Miss Dietrich.

As perfect a soufflé of a romantic comedy as you're likely to find -- and with two people who define star power.

There are no featured reviews for Desire at this time.