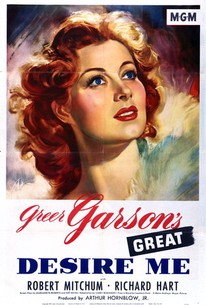 Marise Aubert (Greer Garson) has begun seeing a psychiatrist to treat her overwhelming guilt. It seems that Marise was married to Paul (Robert Mitchum), who was sent overseas in World War II. She loved Paul deeply and remained faithful to him. She then receives tragic news that Paul died in action, and months later is visited by Jean Renaud (Richard Hart), one of Paul's friends from the Army. Jean tells Marise that he and Paul were captured by enemy troops, and Paul died in the midst of a heroic attempt to escape. Marise senses that Jean is as lonely and heartbroken as she is, and she allows him to stay at her house. They fall in love, but the situation becomes complicated when a letter arrives from Paul. Jean hides it from Marise, hoping that she will not discover that her husband is still alive. He tries to convince her to sell her home and move away from her troubling memories, but before the sale can go through, Paul appears at the doorstep. While Paul can forgive Marise for betraying him, she is unable to forgive herself. Desire Me was released without a director's credit; the bulk of the principal photography was supervised by George Cukor, but by all accounts it was a troubled shoot, and eventually Mervyn LeRoy and Jack Conway both worked to finish the picture. Garson nearly drowned while filming one scene, and Mitchum claimed that Cukor put Garson through 125 takes of another scene before she could say the word "No" to his satisfaction. ~ Mark Deming, Rovi

Sam Ash
as Master of Ceremonies
View All

Critic Reviews for Desire Me

There are no critic reviews yet for Desire Me. Keep checking Rotten Tomatoes for updates!

Audience Reviews for Desire Me

A lot of bosom heaving and heavy dramatics. It's all a bit much but the production values are high.