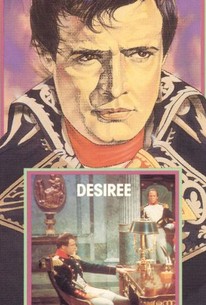 Director Henry Koster and writer Daniel Taradash speculate mightily in this historical tableau charting the rise and fall of Napoleon (Marlon Brando), all due to his unrequited love for noblewoman Desiree (Jean Simmons). The film takes a chronological view of Napoleon's reign and posits Napoleon's love of a woman he wanted to marry as a young general but abandoned for the sake of his career. Both Napoleon and Desiree go their separate ways -- he to become Emperor of France and loveless husband to Josephine (Merle Oberon) and she to become Sweden's disinterested Queen. Napoleon and Desiree meet up again in a whimsical confrontation in which Desiree urges the Little Corporal to surrender and go to St. Helena. The film is based on a novel by Annemarie Selinko that, like the film, takes wild liberties with the truth.

Bert Stevens
as Man at Chaumiers

Cameron A. Grant
as Montel
View All

An extremely lavish but sluggish screen version of the popular novel. Michael Rennie's stylish work as Bernadotte is the best thing in the picture.

This story framed as a historical account of the only woman to stand up to Napoleon doesn't quite conquer our interest, though it is itself an intriguing piece of Hollywood history due to the presence of Brando in an iconic role. [Blu-ray]