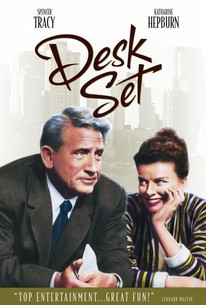 Critics Consensus: Desk Set reunites one of cinema's most well-loved pairings for a solidly crafted romantic comedy that charmingly encapsulates their timeless appeal.

Critics Consensus: Desk Set reunites one of cinema's most well-loved pairings for a solidly crafted romantic comedy that charmingly encapsulates their timeless appeal.

Critic Consensus: Desk Set reunites one of cinema's most well-loved pairings for a solidly crafted romantic comedy that charmingly encapsulates their timeless appeal.

Based on the Broadway play by Robert Fryer and Lawrence Carr, Desk Set represents the eighth screen teaming of Spencer Tracy and Katharine Hepburn. Hepburn plays the head of a TV network research department; Tracy plays an efficiency expert, hired to modernize Hepburn's operation. When Tracy has a huge computer installed, Hepburn and her co-workers (including Joan Blondell and Sue "Miss Landers" Randall) fear that they're going to lose their jobs. Their suspicions are confirmed when the computer merrily begins issuing pink termination slips. But something is obviously amiss: the computer not only fires the ladies, but also the head of the network--and Tracy, who isn't even on the company payroll! At this point, Tracy explains that the computer was designed to help Hepburn and her staff and not replace them; he also confesses that, given the pink-slip incident, this might not have been such a hot idea. But Hepburn, who has fallen in love with Tracy, is in just the right mood to forgive him--and doesn't need to consult her research files to come up with this decision. ~ Hal Erickson, Rovi

King Mojave
as Board Member

Charles Heard
as Board Member

Harry Evans
as Board Member

Hal Taggart
as Board Member

Jack M. Lee
as Board Member

Bill Duray
as Board Member

Drunken Christmas office parties and antiquated technology notwithstanding, the real fun in Desk Set is watching these two pros and longtime loves play off of each other for one of their final cinematic turns together.

[Miss Hepburn and Mr. Tracy] can tote phone books on their heads or balance feathers on their chins and be amusing -- which is about the size of what they do here.

The results are some splendidly crisp exchanges between the pair, and the inevitable scene of embarrassment where he is literally 'caught with his pants down'.

One of the great Tracy-Hepburn pairings, this adaptation from the Broadway stage focuses on the love that grows from the contentious relationship...

The least, perhaps, of the Spencer Tracy-Katharine Hepburn collaborations...this 1957 comedy is nevertheless a bright and witty vehicle for its stars, directed well and anonymously by that fine old hack Walter Lang.

It has, however, some notable advantages [over the stage version] in the shape of Miss Katherine Hepburn in the leading role (with Spencer Tracy thrown in for good measure opposite her).

The Broadway comedy of two seasons ago has been turned into a somewhat draggy but pleasant movie.

It doesn't have the emotional heft of something like The Apartment but it's a delightful little comedy with a hint of Christmas in it for the holidays.

A charming, if predictable, romantic comedy is enlivened by the matchless talents of Spencer Tracy and Katharine Hepburn--as well as by its graceful use of a brand-new comic trope: the electronic computer.

A winning comedy that's as leisurely as the Eisenhower years, with just a hint of the rebellion that's coming down the pike.

Mildly amusing but not great comedy, penned by the Ephrons from a stage play, this eighth teaming of Tracy and Hepburn places the battle of the sexes in the workplace against the threat of new technology.

What I really appreciated in this movie was that Hepburn was like - what, 50? - and Tracy approaching 60, and they could still create a magic movie that never, ever alludes to their age (which modern studio execs, particularly Nancy Meyers, would absolutely leap on). Also, I think that Joan Blondell is a ton of fun. It's nice to know she held onto her spark til the end.

Even people today can relate to the problems of modernization in the workplace, which is what this movie deals with, but in a humourous way. Hepburn and Tracy are great together as always, and this movie is a lot of fun.

It is always fun to watch Katharine Hepburn and Spencer Tracy. Imagine a movie about a computer replacing staff researchers! Actually, the movie is a bit silly. Of course, Tracy and Hepburn fall for each other, so the computer story-line is only a side issue.

the best of the tracy-hepburn movies with a wonderful supporting cast. Did Joan Blondell ever give a bad performance?