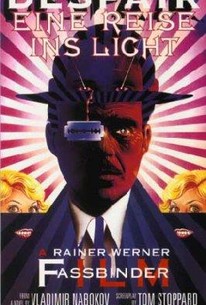 Having made as many films as he had years, at 31, Rainer Werner Fassbinder essayed a slightly different approach for his 32nd film, Despair. Here, he uses a witty screenplay written by the well-known playwright Tom Stoppard, based on a novel by Vladimir Nabokov. Furthermore, the entire film, set in 1930s Germany, is in English. It received mixed reviews, if only because it is so unlike the director's other works. In the story, a Russian owner of a German chocolate-factory, whose business and marriage are both on the rocks, fantasizes about leaving his current life, and living another one. Indeed, he has delusions that he is somehow outside himself, watching himself live his life. So strong is his desire to alter his life that when he encounters a tramp while on a brief business trip, he imagines that the man looks exactly like him, decides to exchange identities with the tramp, and murders him. ~ Clarke Fountain, Rovi

Armin Meier
as 1st and 2nd Twin and Foreman

Despair does absolutely nothing worth doing, but it does succeed in one area where several hack directors before him failed: bagging a bad performance from Dirk Bogarde.

Dirk Bogarde, looking natty and nerve-worn, is exactly right as the fissured Hermann, a chocolate manufacturer whose business has turned bitter.

Certainly Dirk Bogarde's performance, although arch and mannered, is uncomfortably compelling. And the cinematography is undeniably striking. But I can't say I enjoyed it.

The first half is oppressive, cluttered, and funny, but as the film forsakes its artificial settings for more open spaces, it becomes pale and mechanical.

[It's] Rainer Werner Fassbinder's most obsessively arty movie and by no means his best. Even so, it is wildly distinctive.

Fassbinder films life in the cosseted class as a masque of glass and mirrors, replete with alluring deceptions and suave surfaces that belie volcanic passions.

The resultant film is, he says, faithful to both Stoppard's script and Nabokov's novel; it is certainly not faithful to Fassbinder, who is here seen tripping over one style after another and ending up utterly ditched.

Unpleasant but thoughtful and provocative psychodrama set in Berlin, in the 1930s.

Everything about Despair feels queasily off - the plot, the acting, the dialogue and the fussily over-decorated sets.

Not one of [Fassbinder's] best.

A lambent house of cards

It is beautifully photographed by Ballhaus in a frame filled with reflective glass and mirrors.

Despair is a fun and absurd feature. The filmmaking is reminiscent of Bunuel, especially the upfront symbolic imagery, yet the style is distinctly playful, both camera work and acting.

As Fassbinder's first film in English, this psychedelic drama may have an intriguing story but the direction is heavy-handed and lacks that conviction found in his earlier works. Especially the tone he adopts seems incompatible with the kind of story he wants to tell.

Personally, I think this is one of Bogarde's finest roles.