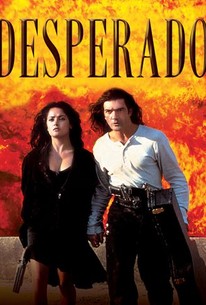 The mysterious, guitar toting "El Mariachi" walks the streets again to avenge the death of his beloved girl friend in this bloody actioner. The tale opens in a seedy cantina where a flustered American bursts in and tells how he just saw a stranger come in and kill everyone in a neighboring bar. He then tells them that the stranger was looking for a man named Bucho and he is heading for their bar. Suddenly, El Mariachi appears looking for Bucho, who uses the bar as a front for his narcotics smuggling ring. An enormous gunfight erupts. Still Mariachi does not catch the elusive drug dealer who must spend the rest of the film in hot pursuit while simultaneously dodging the bullets of Bucho's henchmen.

David Alvarado
as Buddy
View All

[A] satisfying banquet of pulp filmmaking.

Rodriguez's second feature may be a rambling, derivative exercise in gratuitous violence, but its determination to proceed as if the word 'restraint' never existed makes for gleeful entertainment.

Mr. Rodriguez may be good enough to make a film about anything, but Desperado would collapse if its characters had to do anything but play with guns.

What Rodriguez has essentially done in Desperado is make a slicker, more expensive copy of what came before. And what looked promising for $7,000 looks tiresome for a whole lot more.

The routine gets tiresome for the Mariachi, and for the audience, too, after about an hour.

Desperado is best when Rodriguez lets his playful side cut through the blare of a born filmmaker indulging his first chance at high-end Hollywood fireworks.

Desperado is a brilliant action film and an enduring favorite among fans of Rodiguez's oeuvre.

It's a splashy, flashy, sexy cartoon with a charismatic star who has a fine old time stomping his refined European image into the dust.

Filled with action thrilling sequences, "Desperado" goes to show what Robert Rodriguez can do with a decent budget. With stylish and inventive weapons, this film will keep audiences entertained.

Brimming with innovative and whimsical gunplay and action arrangements, built up through fitting music, sharp camerawork, and a unique, semi-Spaghetti Western setting.

"Desperado is filled with an undeniable enthusiasm that makes its faults easier to ignore."

A shoot-em-up (and there's a lot of shooting) with attitude (likewise). Now some might confuse attitude with style, but shooting a gun while pumping your fists like one was throwing punches (unnecessary, duh) is not style. And Antonio Banderas practically does Zoolander's "I'm sooo hot" pout through the whole movie embarrassingly. Luckily Salma Hayek's youth and extravagant DNA save the efforts from total unwatchable-ness. Well that and watching Quentin Tarantino get his head blown clean off.

This is a very wild, cool, and stylish film, even if it ends up being style over substance and story (with a messy and scattershot narrative to boot). In a way, this is more of a remake than a loose sequel or spin off. The original mariachi from El Mariachi does make an appearance, but this film is essentially the same story as the first, but with a different guy who knows the first guy. Make sense? Well, if not, don't worry. It's of no real consequence anyway. The action and stunts are inventive, done well, and a joy to watch. Buscemi and Tarantino ham it up in some fun supporting roles, and both Banderas and Hayek (especially Hayek, *wink* *wink*) are great to watch. I have a big attachment to this movie as I saw it at a young age and it introduced me to Rodriguez's work. It also kinda made me wanna make action movies, too. Like I said, it's got some flaws, but for solid action spectacle entertainment, this is a good film to turn to.

Antonio Banderas takes up the mantle of the wandering mariachi hunting the drug dealer who murdered the woman he loved and ruined his life. Although Desperado continues from where El Mariachi left off, it's more a bigger budget re-invention of the original than a true sequel, in a similar vein to Evil Dead II. With more resources at his disposal, Rodriguez fulfills all the potential of the idea, with some fantastic John Woo influenced action sequences which have a kind of ultra violent dance choreography and employs his now familiar ensemble cast including Cheech Marin, Quentina Tarantino, Steve Buscemi and Danny Trejo. Banderas has never been cooler, Salma Hayek never more gorgeous and it's a sexy, stylish and hugely entertaining left-field shoot-'em up with just the right amount of tongue in cheek humour. Still one of my favourite Robert Rodriguez films.