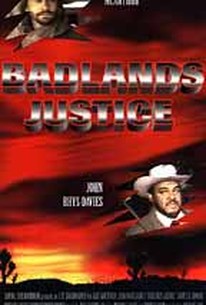 Badlands Justice is another in a series of Desperado feature films made exclusively for television. Alex McArthur returns as cowboy Duell McCall, who wanders the wide frontier in search of the one man who will clear him of a murder charge (What price Fugitive?) Once more, McCall finds himself in a corruption-ridden mining town. Since no one knows his true identity, he is able to establish a modicum of law and order, despite the concerted efforts of greedy land baron John Rhys-Davies. It is only a matter of time, however, before McCall will be forced to move on to other adventures. Well photographed and consummately acted, Badlands Justice premiered December 17, 1989.

James B. Sikking
as Clarke

There are no critic reviews yet for Desperado: Badlands Justice. Keep checking Rotten Tomatoes for updates!

There are no featured reviews for Desperado: Badlands Justice at this time.