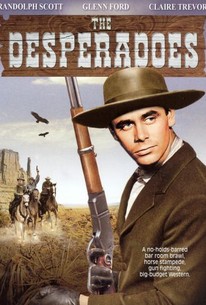 In this Western drama, Steve Upton (Randolph Scott) is the sheriff of a Utah community in 1860. Upton's best friend, Cheyenne Rogers (Glenn Ford), was once an outlaw, but under Steve's guidance, he's gone straight and tries to earn an honest living. However, while Cheyenne is in town to pay Upton a visit, the local bank is robbed and Cheyenne is the prime suspect. Through Cheyenne is quickly convicted, Upton is convinced his friend is innocent, and the sheriff helps the former outlaw break out of jail; together, they hit the trail trying to find the real culprits and clean up the town. The Desperadoes had the distinction of being the first Technicolor feature released by Columbia Pictures.

Charles King
as Outlaw
View All

Critic Reviews for The Desperadoes

A true work of art. [Full review in Spanish]

The film is noteworthy because it was Columbia's first in Technicolor.

Audience Reviews for The Desperadoes

Run of the mill western with a good cast. Some of Claire Trevor's costumes are eyepoppingly over the top. That she can carry them off says a great deal about her class and magnetism. Scott on the other hand whether through his playing of it or the role itself practially evaporates from the screen. Some of the scenes of the open range are fine but then stuck right in the middle are obvious rear projection shots which take you right out of the picture.