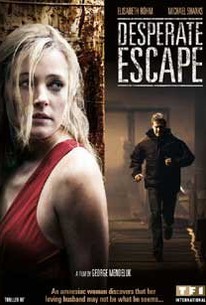 A woman suffering from amnesia discovers that the man she believes to be her fiancée may be the man she should fear most in this made for television thriller starring Elisabeth Rohm and Michael Shanks. Brooke was running from a mysterious threat when she somehow ended up aboard a small boat. Set adrift at sea, Brooke was later taken to the hospital and diagnosed with memory loss. Hoping to speed up the recovery process, Brooke's fiancée Brett takes her to the couple's vacation villa, where patiently cares for her while gently reminding her about the details of their former life together. But when Brooke's instincts tell her to start seeking out the answers for herself, Brett inexplicably intervenes. Now, the more Brooke discovers about her own past, the more she begins to fear the man who claims to care for her most. ~ Jason Buchanan, Rovi

There are no critic reviews yet for Desperate Escape. Keep checking Rotten Tomatoes for updates!