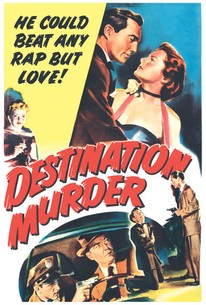 Producer-director Edward L. Cahn's Prominent Pictures produced this low-budget thriller-noir which was then sold outright to RKO. Joyce MacKenzie stars as Laura Mansfield whose father (Franklyn Farnum) is killed in cold blood by smalltime hoodlum turned messenger boy Jackie Wales (Stanley Clements). But the latter has a seemingly ironclad alibi and Laura goes undercover as a nightclub cigarette girl to trap him. Unbeknownst to the heroine, however, Wales is blackmailing Armitage (Albert Dekker), the ruthless nightclub operator who had hired him to murder Mansfield in the first place. But is Armitage the real "Mr. Big" or is someone else pulling the strings?

Steve Gibson's Redcaps
as Themselves
View All

Likable little film noir with a gutsy heroine and an unusually diverse group of bad guys.

A snappy B-film crime thriller from RKO that is only enjoyable because the story is so quirky.

There are no featured reviews for Destination Murder at this time.