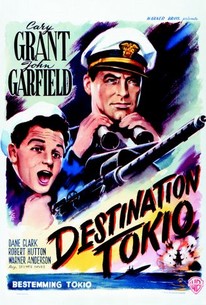 Early in World War II, an American submarine commander (Cary Grant) receives orders that his ship is to sneak into the Tokyo harbor to gain meteorological information pertaining to an upcoming air raid of mainland Japan. The film, whose original story was nominated for an Oscar, proved to be a big box-office success.

John Ridgely
as Reserve Off. Raymond

Dane Clark
as Tin Can

Whit Bissell
as Yo Yo

George Lloyd
as Chief of Boat

Carlyle Blackwell
as Man on phone

Ya Sing Sung
as Japanese on Beach

James B. Leong
as Japanese

Roland Got
as Japanese Officer

Kirby Grant
as Captain at Briefing

Lou Marcelle
as Narrator
View All

The cast is unbeatable. [Full review in Spanish]

As thick with outright propaganda as KFC chicken has grease, yet and still entertaining take on a submarine mission into enemy waters. It was made during wartime, yah, and nobody really knew yet which way the ball was bouncing, and so many "rah! rah!" scenes can be forgiven, as well as the many character caricatures. I had the thought while watching that the intended audience for this was not the men fighting the war - cause they already were doing that - but rather explicitly for the women anxiously waiting for the outcome. That thought added much to the entire film.

Even with Mr. Grant - campy and dull.

I'm not crazy about this movie, but I am crazy about Grant. He gives a good performance, and the movie has some intense scenes, but overall it was kind of boring.

A tension-filled trip on a U.S. submarine heading to bomb Japan in WWII. Cary Grant does a great job as the boat captain, leading John Garfield, Dane Clark and Alan Hale into the Sea of Japan, through nests of undersea mines and enemy ships. I found myself holding my breath during some of the more tense action. Is that's not enough to recommend it, I don't know what else it would take.