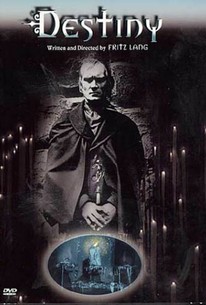 Fritz Lang was a stickler for realism in his American films; not so his German silents, which were fanciful to the point of being fairy tales. Der Müde Tod, Lang's first big critical success, is an allegorical tale of love, fidelity and death. The heroine (Lil Dagover), who in her dreams is confronted by Mr. Death, argues for the life of her beloved, but is unable to make the personal sacrifices that Death insists upon. Originally presented in three parts, Der Müde Tod was often boiled down to a single film for its non-German showings. Its English-language titles range from The Weary Death to Between Two Worlds to Beyond the Wall to Destiny. ~ Hal Erickson, Rovi

Max Adalbert
as Notar/Schatzmeister
View All

Its key horrors and delights - an owl in the moonlight, a midget presiding over a cockfight, a secret lover buried alive - are all the more searing.

It's a grim dirge masquerading as a moralistic fable.

It is bizarre and captivating, an eerie dream of longing and fear.

Even before he was punching out canonical classics, Fritz Lang's genius was supremely evident.

This one will haunt your dreams.

It is one of three very remarkable German productions (the other two, The Cabinet of Dr. Caligari and The Street, will be released shortly) that are bound, sooner or later, to effect radical changes in the standards of film-making.

Visionary filmmaking, the work of an artist exploring the possibilities of a new and burgeoning art.

Unmistakably ancient, but full of invention.

Very little of Lang's early work remains available to watch in this condition. Destiny is a real treat. Watch it, and see if it can inspire you as it did the likes of Alfred Hitchcock.

Technique, sensibility, cinematic vision, and story all come together in this epic drama of love, death, myth, and sacrifice, a mix of supernatural drama and mythic parable produced in the shadow of World War I.

Death has been played many times, from Bergman's "The Seventh Seal (1952)" to "Bill and Ted's Bogus Journey (1991)" and countless others, but never as sympathetic as in "Destiny."

This beautiful 2K restoration...features the original intertitles while simulating the color tinting and toning of the original not seen since the 1920's...Unveiled at the 2016 Berlin Film Festival, Kino Lorber's release is a real treat for cinephiles.

A beautifully spooky and adventurous movie about death. It is sort of an anthology horror movie with three different stories of love and death told by the grim reaper. I really liked it, it's cool.

a wonderful gothic romance like something from grimm's fairy tales. in his autobiography buñuel wrote that this inspired him to make films. there's an homage to it in un chien andalou. it was one of alfred hitchcock's favorites and a big influence on the thief of baghdad (both versions) and murnau's faust among many, many others