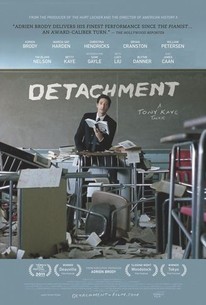 Critics Consensus: Detachment's heart is in the right place, but overall it doesn't offer any solutions to its passionate ranting.

Critics Consensus: Detachment's heart is in the right place, but overall it doesn't offer any solutions to its passionate ranting.

Critic Consensus: Detachment's heart is in the right place, but overall it doesn't offer any solutions to its passionate ranting.

In Director Tony Kaye's Detachment, Adrien Brody stars as Henry Barthes, an educator with a true talent to connect with his students. Yet Henry has chosen to bury his gift. By spending his days as a substitute teacher, he conveniently avoids any emotional connections by never staying anywhere long enough to form an attachment to either students or colleagues. When a new assignment places him at a public school where a frustrated, burned-out administration has created an apathetic student body, Henry soon becomes a role model to the disaffected youth. In finding an unlikely emotional connection to the students, teachers, and a runaway teen he takes in from the streets, Henry realizes that he's not alone in his life and death struggle to find beauty in a seemingly vicious and loveless world. -- (C) Tribeca Film

Celia Schaefer
as Gretchen from the Free Clinic

Stephen Payne
as John on Bus

A gripping drama, Detachment offers a gut-wrenching look at the school system, as told by the unsung heroes--the teachers.

Detachment has such original energy and is so infused with righteous anger that it proves hard to dismiss.

Grappling with the dilapidation of America's school system is fair enough, but the movie is painfully undone by its pretentious poetry of despair.

If Detachment is only partially successful, it is still more watchable than most school sagas.

It's watchable enough, but the bludgeoning screenplay seems undercooked compared to the high-grade actors on show.

Like the recent Margaret it rages against the dying of the light in a country where too many people think the lights are still on.

Detachment clearly has high aspirations, but unfortunately its jumbled narration means that it falls just shy of the mark.

Tony Kaye's ragged, expressionistic aesthetic may have its detractors but it intuitively suits the wrought scenario of Detachment.

This is imitation Polanski, and not a good imitation at that.

A bizarre, well intentioned mess, at the very least, Detachment is never dull...even as the film is bad, it's compulsively watchable.

It's a film so well paced with a message so relevant that it deserves an audience bigger than what it got and it deserves more of an emotional impact than will resonant throughout.

While Adrien Brody gives it his all in his performance, the film suffers greatly from an attempt to equalize its multiple plotlines.

Jeff Beck
We Got This Covered
View All Critic Reviews (71)

So well-paced, well-executed, and helming one of the most needed stories in such a long time, "Detachment" is the type of film that is right up my alley. Although it received mixed reviews, I personally think it is one of the most thought-provoking films of this decade and I highly recommend it, especially to film fans such as myself. It has a screenplay so interesting and deep that I just could not look away from the screen. Adrian Brody is remarkable in this role and I believed every single action taken by his character. "Detachment" follows a troubled and hardened high school teacher as he deals with a new school with arrogant teenagers, a dying grandfather, and a devoted teenage whore. The evolution of the characters throughout this picture felt extremely earned, do to it's devoted script, but I did feel a little let down with the resolution of Adrien Brody's character, which was a bit of a letdown. Overall. this is one of the best films to come from 2011 in my opinion. Terrific film all around and it really makes you think about life in general.

A dark chronicling of the sad state of the American Public School System, through the eyes of a long-term substitute teacher (Adrien Brody), wrestling his own demons whilst trying to make a difference both professionally and personally during his latest assignment. Tony Kaye's "Detachment" is not the lecture I was expecting. It's an almost spiritual study of a system; a broken one, flawed (and as suggested) not inherently but by larger societal problems too broad and numerous to fully grasp or understand. It assesses these issues not with hope but with pitch black honesty. No solutions given but the disturbing thought that some things will never change. Kaye uses the phenomenal performance of Adrian Brody to ground us in the drama. We think at first this will be one man's story, but the narrative's concerns are much broader. This reminded me of "American History X," a masterpiece, also directed by Kaye. It showcases a career best performance (Ed Norton in that movie) in a character piece that isn't so much about a personal journey as it is a grand statement about a specific social problem that will continue to thrive with no end in sight. In "Detachment," Kaye's technique is equally experimental, in a story that's even less streamlined. Brody is definitely the star of the movie, but is not necessarily the focus. We are violently thrust into the lives of a myriad characters; unexpectedly and frantically at times. It could be argued that "Detachment" lacks focus to a fault, but I didn't feel this. Kaye's creation works as collage, similar to but not as extreme as Terrence Malick's take on WWII in "The Thin Red Line." As with "American History X," Kaye's stance is obvious and moment to moment scenes are a bit preachy, but none of this detracts from the established tone and eventual takeaway of this socially conscience, effortlessly powerful movie. The film's cold, apocalyptic final shots aptly conclude a bleak portrait. One that's relentlessly grim, sure, but a bold work of cinema that leaves a lot to ponder.

I found this film depressing, and overall just empty. It is non-stop gloom and doom, and it seems each person is having major issues: from the students, to the faculty, to any other supporting cast members. The issues are never resolved, they just seem to linger throughout. After it was all over, I just felt unsatisfied, and unmoved by it all....

Having been a big fan of "American History X" in 1998, I was eager to see what else director Tony Kaye had in store. Unfortunately, he didn't make that many films and those that he did - "Lobby Lobster" and "Black Water Transit" - didn't quite reach a bigger audience. As a result, I was happy to come across "Detachment" which proves that Kaye hasn't lost any of his style or starkness. Henry Barthes (Adrien Brody) is a substitute teacher brought in to a struggling urban high school to teach English and work with kids who are performing at a very low grade. Being a substitute is exactly the way Henry likes it as he deliberately tries to avoid making genuine connections with people (and that includes his pupils). As time goes on, though, Mr. Barthes realises his pupils' needs for his input which forces him to confront his own demons and isolation. "And never have I felt so deeply at one and the same time so detached from myself and so present in the world." As the film opens, this is the quote from French philosopher Albert Camus, that's scribed onto a blackboard before we are introduced to the protagonist and the personal conflict he finds himself in. On the one hand, he's a caring individual but on the other, he deliberately keeps a distance from people as he's consumed by a guilt that doesn't belong to him. His detachment is also reflected in the frustrated and disillusioned pupils he teaches, making this a melting pot of emotionally dysfunctional people. It's this very mirroring in the individuals that make this quite a thought provoking character study, as well as a diatribe on the state of the American educational system and the problems therein. Kaye shoots the film with an edgy, fly on the wall approach, utilising the shaky-cam technique and numerous close-ups that bring you closer to the characters and their inner turmoil. There's also the assembly of a very impressive cast, all-be-it, a lot of them are wasted in thankless, underwritten roles. The likes of Bryan Cranston, Blythe Danner and William Petersen needn't have turned up at all, but James Caan lightens the mood whenever he's onscreen and the young unknowns get a chance to shine instead; particularly (the director's daughter) Betty Kaye, who develops a crush on her teacher and Sami Gayle as a young prostitute who develops a similar infatuation. The real star, though, is a brooding and commanding Brody. He's rarely offscreen for the entirety of the film and even though it's no surprise that he delivers his usual reliability, he's especially good with a very powerful and charismatic performance. However, the cast and the impressive handling of the material can't save the film from being overly depressing, or when drawing to it's conclusion, descending into melodrama from which it never fully recovers. Cut from the same cloth as the, Oscar nominated, Ryan Gosling movie "Half Nelson", director Tony Kaye delivers a good insight into the difficulties of teaching and the importance of instilling a good childhood and sense of self in our youth. Mark Walker