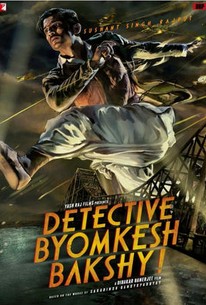 In a contemporary interpretation of war torn Calcutta during the 1940's, the film follows the first adventure of Byomkesh (Sushant Singh Rajput), fresh out of college, as he pits himself against an evil genius who is out to destroy the world. It's his wits against the most villainous arch criminal the world has seen, in a world of murder, international political intrigue and seduction. (C) Official Facebook

Adventure fails to permeate the listlessness of this overlong, self-indulgent would-be thriller.

Dibakar's reinvention of the Sharadindu Bandopadhyay detective is a ponderously crafted artifice rather than the handiwork of an off-the-cuff talent.

Detective Byomkesh Bakshy! is a film that filled me to the brim. It is the kind of film that I will recall and savour, flaws and all.

It's fascinating to see Byomkesh evolve as the case does. He sees the heart of darkness and emerges wiser, more mature and, ironically, a tad more joyful. It's a demanding role and Sushant Singh Rajput more than delivers.

"How do middle-class people like us stand up for our country?" Byomkesh asks Ajit. The teasing answer: "We don't. We go to the movies."

Detective Byomkesh Bakshy is good, but there's no real anchor in the film on which I can pin its success, and perhaps that is a marker that its success isn't all that successful.

Rajput immerses himself as Bakshy and comes out on top, but the film itself never manages to soar, despite threatening to do so many times.

Although Detective Byomkesh Bakshy! works hard on creating a convincing setting for Byomkesh to make his mark, the characters are mostly under-written and the central mystery lacks tension and a sense of imminent danger.

A complex murder mystery that keeps the audience guessing right to the end.

An exhilirating and engaging experience.

It's good, but I'd much rather enjoy this director's cheeky experiments with characters and convention, over pulp and form.

The exclamation mark suffixed to the title is not out of place.

"A complex murder mystery that keeps the audience guessing right to the end." ~ one of the Critic Reviews here. It surprises me that a handful of other critics too have expressed this sort of feeling. Guessing right to the end? Honestly? No offense, as ever, but if you've watched a couple of detective/suspense movies (or read such books), you should be able to figure out the villain quite easily within minutes even before the interval. The plot and the performances are too good to be rated any more than 1/5.