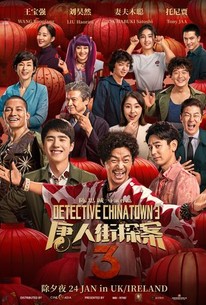 After Bangkok and New York, a big criminal case took place in Tokyo. Detective Tang Ren (Wang Baoqiang) and Qin Feng (Liu Haoran) were invited for investigation by Noda Hiroshi (Tsumabuki Satoshi). The case was becoming more suspicious as more detectives on the Crimaster list joined the challenge, including the top-ranked Q. A battle between the strongest detectives in Asia is about to burst with laughter.

The central murder-mystery contains so many convoluted diversions, digressions and detours it makes the whole enterprise play like a long stream-of-consciousness sketch with a glaringly hollow core.

Its enormous box office numbers notwithstanding, I have to rate Detective Chinatown 3 as something of a disappointment after the raucously engaging first two entries.

While a relatively low bar, artistically speaking, Detective Chinatown 3 may be considered the best entry in the series to-date.

Even when it is more dedicated to brand extension than the art of deduction, Detective Chinatown 3 exudes a heightened zaniness which is most welcome in today's largely homogenised franchise landscape.

There are no featured reviews for Detective Chinatown 3 at this time.