Detective Dee and the Mystery of the Phantom Flame2011

Detective Dee and the Mystery of the Phantom Flame (2011) 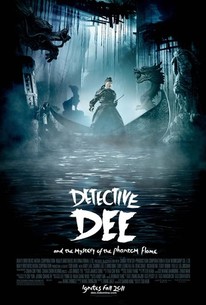 Detective Dee and the Mystery of the Phantom Flame Photos

A period epic from genre master Tsui Hark, Detective Dee is an action-packed, visually breathtaking Sherlock Holmes-style mystery starring some of China's top acting talent. Stunningly choreographed by master Sammo Hung, this intricately plotted whodunit is set in an exquisitely realized steampunk version of ancient China. On the eve of her coronation as Empress (Carina Lau), China's most powerful woman is haunted by a chilling murder mystery: seven men under her command have burst into flames, leaving behind only black ash and skeletal bones. Recognizing this threat to her power, she turns to the infamous Dee Renjie (Andy Lau): a man whose unparalleled wisdom is matched only by his martial arts skills. As he battles a series of bizarre dangers, he unveils a chilling truth that places his life, and the future of an entire dynasty, in peril. -- (C) Indomina

He Shenming
as Prison Officer

Detective Dee brings back the excitement of great pop cinema that drew cinephiles to Hong Kong in the first place.

The film's visual style is at times so dense it simply overwhelms (ditto the plot).

Creative spectacle, humor, and suspense drive the film, and we can only hope that Detective Dee and the Mystery of the Phantom Flame kicks off a new mystery franchise.

It is a peculiar conflation of history -- there really was an Empress Wu -- and pure cinematic fantasy.

By the end, with the running time pushing past the two-hour mark, it's reasonable to ask: Just who are these people?

The quality and entertainment value of Detective Dee is high. But I so appreciate films coming from places where honesty and freedom are able to shine through in the story telling.

Detective Dee is a sweet little cotton candy confection -- but certain parts might stick to your teeth.

The kind of escapist entertainment that they just don't make anymore, which also makes its allusions to real-world concerns such as political hegemony and torture feel a bit misplaced in this movie fantasia.

The film is both sumptuous and thrilling, with enough action to keep the audience entertained at the same time as keeping the clues rolling in to give the audience a chance to guess who the murderer is.

If you're looking for a popcorn movie, producer-director Tsui has crafted an absurdist fantasy that might cure -- or spontaneously combust -- the summertime blues. But even escapist entertainment can have interesting angles.

What's tragic about "Detective Dee" is the fact that it rapes a chapter of Chinese history beyond any semblance of reality.

A wonderful martial arts adventure that keeps a fun and engaging pace. Detective Dee is released from prison in order to help solve a series of spontaneous combustions. He's pretty much the Chinese Sherlock Holmes, but the film does mix fantasy elements as well. Detective Dee is joined by a series of interesting sidekicks, such as the albino member of the supreme court, Pei, and Jing'er a delegate of the Empress. The film has a fantastic ability to conflict characters with their own actions, showing a distinct line between responsibility and choice. The sets and landscapes were breathtaking at times, especially the gigantic statue of Buddha. The film does it all with great adventure sequences, and even has an impressive fight with some CGI deer.

Viewing Detective Dee I often felt a stranger in a strange land. The sensibilities of the film seemed as foreign as the language - all the talk of honor and serving the empire... while each character (and believe me, there are many) has their own and seemingly changeable beliefs on how to do so. This flexible playing field could make for some interesting Byzantine politics, but somehow the film never got under my skin, making me care who was what. Perhaps it was the language barrier - having to read subtitles while watching all the beautiful sets and then missing parts of the action as the subtitles rolled by. "Wait a minute - who is this guy... isn't he.... No, he's some other guy" happened way too often - and perhaps this is just my inability to keep up with the twists and turns while trying to read the badly translated dialog (or at least I hope it was just a bad translation and not fer real cheesy dialog). Anyhow, there are lots of nice sets and cool costumes on display, along with acrobatic foo reminiscent of Crouching Tiger - though here the jumps and such seemed too much CG. I also have a distaste for films that start out with a long written narrative that tries to put you into the time and place (except for the first Star Wars film) - I dunno, it just seems like the film should let the viewers draw their own conclusions as far as the where and when of a piece - but I guess, given the gravitas of the narrative conclusion, that the Chinese take this story seriously (evidently there was actually an Empress Wu), and perhaps I'm missing something here as well. On a final note of disquieting strangeness for me - it is mentioned several times that the towering statue to Budha being erected for the Empress' coronation was 60 yards tall - ok, half a football field - 180 feet, or 18 stories tall putting it another way - somehow that just didn't seem right as this sucker towers over everything. Again, putting a definite number on something where there didn't have to be one - just say the sucker was huge and let's leave it at that.... And once again I don't know why this bugged me - but somehow is part and parcel of my entire feeling of disconnect and bewilderment with the film.

One over the top power packed film, Doesn't get any better, plenty of action packed scenes. The acting and costumes are unreal, Can't imagine on the big screen or in blue ray. 5 stars 4-10-12

Detective Dee and the Mystery of the Phantom Flame Quotes